41 Black Photographers exhibiting together in NYC for the first time.

You are here: Home / Arts & Leisure / Media / 41 Black Photographers exhibiting together in NYC for the first time. 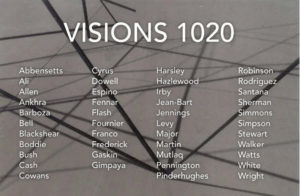 https://www.kenkeleba.org/
Who: 41 Black Photographers exhibiting together in NYC for the first time.

What: Visions 1020 Photography show at the Wilmer Jennings Gallery at Kenkeleba

Why: To highlight a eclectic mix of images spanning the last decade

The NY Photo community will be treated to a rare opportunity when forty-one Black Photographers present some of their finest work from the last ten years in Visions 1020 at the Wilmer Jennings Gallery at Kenkeleba, 219 East 2nd Street at Ave. B. Opening on Sunday, March 8th, 3pm to 6pm, followed with a panel discussion on Saturday, March 28th and closing on May 2nd, 2020.

New York is a special city where unique events happen daily but some events happen rarely if ever and this Sunday, March 8th kicks off one of those rare opportunities as Visions 1020 celebrates and displays a diverse array of imagery created during the second decade of the 21st Century.

When some of the finest and noted Black photographers in the world (including original and current members the noted Kamoinge photo group) and a variety of other well known photographers from the tri-state photo community come together in one space to exhibit from their collections is surely a reason to be celebrated.

Gallery at Kenkeleba for making this happen.

The Gallery is open Wed – Sat 11-6pm and all are welcome.