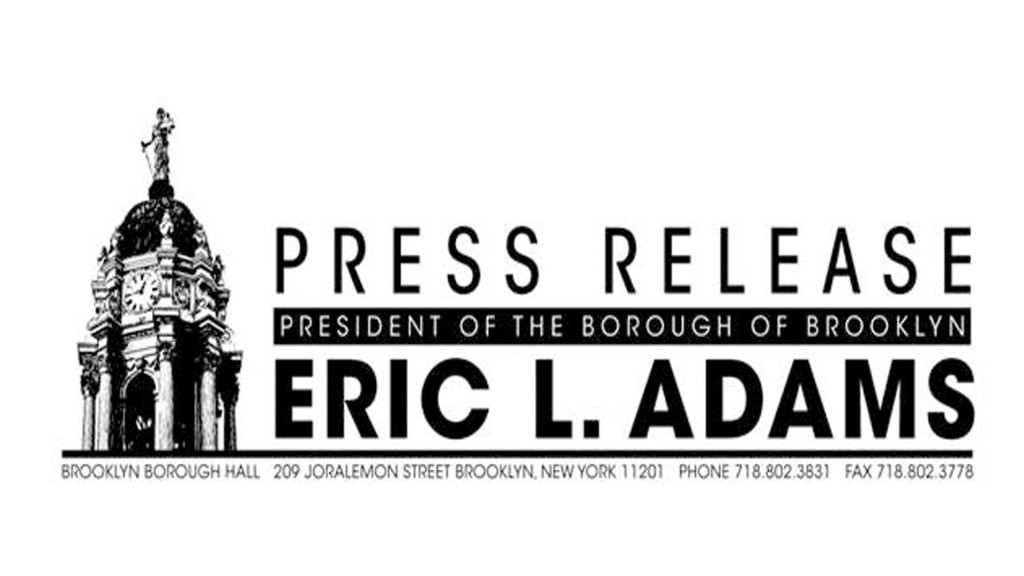 BROOKLYN, NY, July 31, 2015: On Friday, Brooklyn Borough President Eric L. Adams unveiled the parks funding component of his capital budget plan during a press conference at the Brooklyn War Memorial, located inside Cadman Plaza Park in Downtown Brooklyn. Standing beside the leadership of the Department of Parks and Recreation, elected officials, park advocates, and local veterans from across the borough, including former Brooklyn Borough President Howard Golden, he outlined the details of his $11.9 million in allocations during Fiscal Year 2016, which represents more than a twofold increase from last year in his budgetary commitment to enhancing Brooklyn’s open space.

“From Greenpoint to Gowanus, from Cypress Hills to Canarsie, I am investing in open space that benefits Brooklynites of all backgrounds,” said Borough President Adams. “Parks are our great equalizer, the backyard for all New Yorkers who don’t have one, turning people from someone living next door to you to your neighbor; I believe in equitably funding and supporting them across our borough. This year’s capital budget enforces that investment in Brooklyn’s parks is not just good for our environment, but for the health of our children, our families, and our neighborhoods.”

The announcement was highlighted by the allocation of $1 million to help overhaul handicapped accessibility at the Brooklyn War Memorial, a monument to over 300,000 Brooklynites who served in World War II that has been shuttered for 25 years. Local veterans, including former Brooklyn Borough President Howard Golden, were on hand to celebrate the milestone.

“This is a giant step in the right direction for the Brooklyn War Memorial,” said Raymond Aalbue, executive director of United Military Veterans of Kings County, Inc. “Borough President Adams was true to his word to start the renovation process. It’s now up to all of our elected officials to get the rest of the money to restore the memorial so the voices of all of our casualties of war will be heard, lest we forget.”

“We are grateful to Borough President Eric Adams for taking this very important step toward the restoration of the Brooklyn War Memorial and the surrounding parkland,” said Toba Potosky, president of the Cadman Park Conservancy. “In taking this action, he is fulfilling a promise to all Brooklyn veterans and their families. Under the leadership of Borough President Adams, the memorial can fulfill its promise of becoming a self-sufficient education and veterans’ center.”

“I thank Borough President Adams for his stewardship of Brooklyn’s many parks, particularly those in the Downtown area such as Cadman Plaza Park and the beautiful Brooklyn War Memorial,” said State Senator Velmanette Montgomery. “These particular parks provide a welcome respite in the downtown district and a link to our shared history, and I’m happy to see Borough President Adams shares my enthusiasm for them.”

Borough President Adams allocated $500,000 toward the development of the Brooklyn Strand, an innovative project to connect open space in Brooklyn Heights, Downtown Brooklyn, DUMBO, and Fort Greene. The funds will be used to convert a parking lot next to Brooklyn Borough Hall into open, shared space.

“The Brooklyn Strand – a 40-acre stretch of disconnected parks, plazas, and greenways between Downtown Brooklyn and Brooklyn Bridge Park – offers enormous potential to create a world-class promenade and gateway to Brooklyn,” said Tucker Reed, President of the Downtown Brooklyn Partnership. “Over the past year, we have worked with more than 40 community groups to develop a vision for what the Brooklyn Strand could be, and we applaud the leadership of Brooklyn Borough President Eric L. Adams for committing significant funds to two projects identified as part of the initiative. We are committed to working with the Borough President to reopen the Brooklyn War Memorial and transform Borough Hall Park into an iconic public space for all Brooklynites to enjoy.

“In communities across Brooklyn, our parks are cherished by area residents of all ages who frequent these beautiful open spaces to engage in recreational and educational activities,” said Council Member Laurie A. Cumbo. “Through the continued investment of City dollars, we can preserve and sustain our neighborhoods parks for future generations.”

Borough President Adams partnered with Council Member Brad Lander to support playground improvements at two parks in Gowanus, including $350,000 for St. Mary’s Playground and $650,000 for Ennis Playground. In the nearby Columbia Waterfront District, Borough President Adams allotted $500,000 for the creation of Columbia Waterfront Park, a brand new two-acre space along the Brooklyn Greenway.

“From Prospect Park to smaller neighborhood playgrounds, my district’s many outdoor spaces are well-loved and well-used, and I’m thrilled that Borough President Adams has committed to supporting park improvement projects all across Brooklyn in the FY 2016 capital budget,” said Council Member Lander. “I’m especially proud that Borough President Adams and I were able to come together to support major improvements at both Ennis Playground and St. Mary’s Playground, both significant steps forward in the Bridging Gowanus plan. I’m also grateful to Borough President Adams for his continued commitment to the restoration of Flatbush Avenue fences and sidewalks, and the creation of new entrances to Prospect Park as part of the second phase of the Flatbush Avenue project, as well as his allocations to the Columbia Waterfront Park. These significant investments in capital funds will help ensure that Brooklyn’s parks remain well maintained spaces for all to enjoy.”

“Parks are special places which help shape the identity of our neighborhoods and give neighbors a place to meet up, play and build community,” said Craig Hammerman, district manager of Brooklyn Community Board 6. “We’re grateful to Borough President Adams and his strong support for our parks and open spaces. His investments in our parks will ensure that they remain safe assets and centers for civic life in our communities.”

Working together with Council Member Carlos Menchaca, Borough President Adams apportioned close to $1 million toward open space in Sunset Park, including $500,000 for new benches and repaved pathways inside Sunset Park as well as $450,000 to improve paving and create seating areas for safe educational use in the Butterfly Garden.

“The Borough President’s partnership on parks and open space projects has been invaluable,” said Council Member Menchaca. “Together, we identified projects that the community identified as important, and were able to make them a reality. Borough President Adams’ commitment to the communities of my district—and the entire borough—speak volumes about how connected he is on the ground to our needs. I thank him for his incredible partnership, and look forward to continue to work together on our shared goals.”

In partnership with Council Member Vincent Gentile, Borough President Adams directed $1.25 million to renovate a deteriorating field and upgrade the track at Fort Hamilton High School in Bay Ridge, a unique case where the Department of Parks and Recreation oversees a school field.

“I would like to thank Borough President Eric Adams for his commitment to restoring the Fort Hamilton High School football field,” said Council Member Gentile. “The Borough President’s allocation, in addition to the $1.3 million secured by myself and the $1.5 million secured by Speaker Melissa Mark-Viverito, has brought us a very long way toward completing the project. My office will continue to stay on top of this project, from start to finish, ensuring the process is as seamless and efficient as possible.”

“Community Board 14 is grateful to Borough President Eric Adams and Council Member David Greenfield for supporting the first major renovation of Kolbert Park in twenty years,” said Alvin Berk, chair of Brooklyn Community Board 14. “Kolbert is the only public space in Midwood where families with young children, teenagers, adults, and seniors can come together to play or simply relax. This investment by Borough President Adams and Council Member Greenfield represents a commitment to thousands of Community District 14 residents for whom Kolbert is their only neighborhood park.”

“In addition to already having allocated millions of dollars in capital funding to parks in our district, Borough President Adams came through once again and announced funding in the amount of $500,000 for the renovation of Friends Field and we greatly appreciate it,” said Barry Spitzer, district manager of Brooklyn Community Board 12. “Our parks truly personify the Borough President’s slogan of One Brooklyn, where at any given time one can see parents and children of all races and backgrounds playing together.”

New parks projects receiving funding by Borough President Adams in Fiscal Year 2016 include: $1 million for renovating the playground and courts at Bildersee Playground in Canarsie; $500,000 for converting a field destroyed by overuse to synthetic turf at Cypress Hills Playground in East New York; and $500,000, in partnership with Council Member Rafael Espinal, for providing nighttime lighting for safe passage, creating a path, and restoring the existing natural turf at Hope Ballfield in Bushwick. Borough President Adams also provided additional funding to two ongoing efforts that he supported last year, including $1 million toward BQGreen, a plan to decking the Brooklyn-Queens Expressway from South 3rd Street to South 5th Street in Williamsburg, and $850,000 toward the complete renovation of McGolrick Park in Greenpoint; those initiatives received $1 million and $500,000 in the previous fiscal cycle, respectively.

In addition, Borough President Adams has allocated $335,000 for street tree guards across Brooklyn, responding to calls from the community to fund local beautification efforts.

Following remarks by recipients, Borough President Adams presented each of them with an honorary check with the seal of Brooklyn Borough Hall for their projects and one oversized check, made out to “One Brooklyn,” for parks throughout the borough.

The Silk Road (Painting By Harry Bismuth)
Next Post: The Heir, by Kiera Cass, author of ‘The Selection’ series