You are here: Home / Good News To Go / Byron Allen, is an American businessman, former comedian. 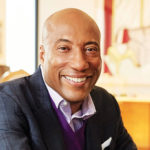 Early life and education
Allen’s interest in show business began during his childhood, when he would accompany his mother to NBC studios in Burbank where she worked as a publicist.

At age 14, Allen put together his first stand-up routine and began appearing on amateur night at comedy clubs throughout the Los Angeles area.

Career
Comedian Jimmie Walker saw Allen’s stand-up act and invited the 14-year-old comedian to join his comedy writing team alongside promising young comedians Jay Leno and David Letterman. At age 18, Allen made his television debut on The Tonight Show Starring Johnny Carson. One of his earliest roles was as a regular presenter on the NBC series Real People during the show’s entire run.

His show “Jammin” was picked up as “Kickin’ It with Byron Allen” in 1992, and by the end of its run had made the list of longest-running United States television series. Allen’s foray into television production began in Los Angeles in 1993 when he founded Entertainment Studios with the launch of his first series — Entertainers with Byron Allen—a weekly, one-hour series profiling the current stars of film and television.

In 2017 the game show Funny You Should Ask was added to the roster of Byron Allen produced shows.

Allen acquired the television assets of The Weather Channel for approximately $300 million in March 2018. In 2019, he announced the launch of THE WEATHER CHANNEL ESPANOL which is slated for 2020, and will soon also launch LOCAL NOW, powered by THE WEATHER CHANNEL technology. Also in 2019, he would partner with Sinclair Broadcast Group to acquire Fox Sports Networks, which The Walt Disney Company was forced to sell as a condition of its purchasing 21st Century Fox.

Awards
In 2018, Allen was selected for the Bloomberg 50 for his accomplishments as a global business leader. He was also selected for the 100 Most Intriguing Entrepreneurs at the Goldman Sachs Builders & Innovators Summit 2018, and he was honored as a Distinguished Guest Speaker at the Salvation Army Christmas Kettle Luncheon in December 2018. In January 2019, Allen was a recipient of NATPE’s 16th Annual Brandon Tartikoff Legacy Awards, presented during the annual NATPE Miami Marketplace & Conference. Allen was also honored with the 2019 Whitney M. Young Jr. Award at the 46th annual Los Angeles Urban League Awards dinner.