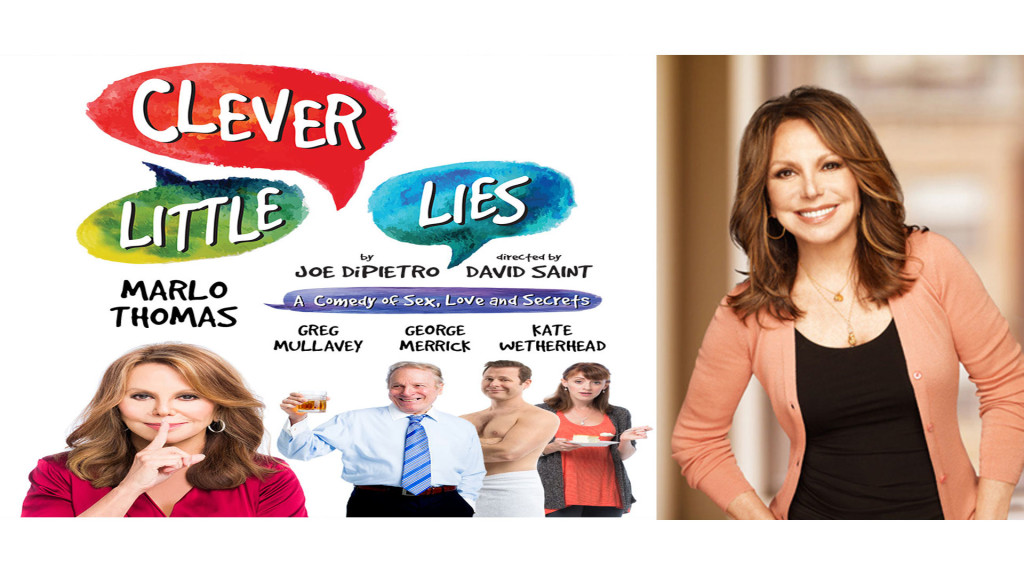 NOW OFF-BROADWAY THROUGH JANUARY 3, 2016
FOLLOWING CRITICALLY ACCLAIMED SOLD-OUT RUNS AT GEORGE STREET PLAYHOUSE (NJ) AND GUILD HALL (EAST HAMPTON)
Emmy, Grammy & Golden Globe Award® winner MARLO THOMAS returns to the stage in CLEVER LITTLE LIES, the outrageous new comedy of sex, love and secrets. For the first time since his acclaimed record-breaking run of I LOVE YOU, YOU’RE PERFECT, NOW CHANGE, Tony Award® winner JOE DiPIETRO (Memphis) brings his newest comedy to the historic Westside Theatre, with direction by George Street Playhouse’s Artistic Director DAVID SAINT.
A mother always knows when something is wrong. When Alice (THOMAS) notices her beloved husband Bill (GREG MULLAVEY) has returned home on edge after a tennis match with their son, she grows suspicious and springs into action. Determined to piece together the puzzle, she invites her son, Bill, Jr. (GEORGE MERRICK), and daughter-in-law, Jane (KATE WETHERHEAD), over for drinks and dessert. Sidesplitting chaos ensues as Alice digs for the truth, resulting in even more honesty than anyone expected. Shattering and hilarious, CLEVER LITTLE LIES is a story of long-term love and marriage… for better… and for worse.