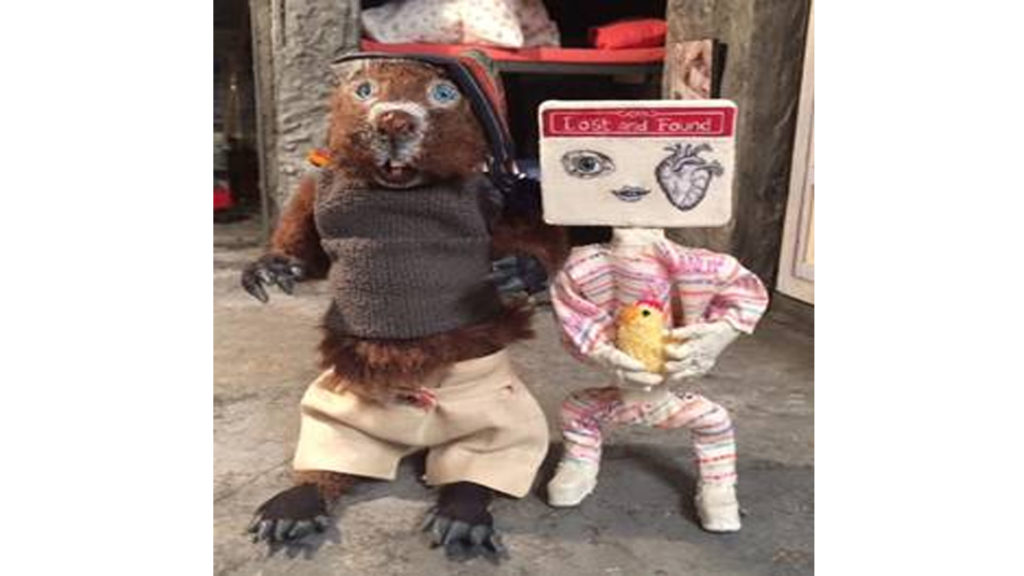 JAN 30, 2017- NY, NY- ClothesPin Freak Productions announced today that an invitation-only preview screening of “Meeting MacGuffin” will be held Thursday, Feb. 2 from 8-10 pm at Brooklyn’s Wythe Hotel Screening Room. “Speaking Of Freaks”, a short documentary by filmmaker Hamad Altourah about the making of “Meeting MacGuffin” and Catya’s art in general, will also be screened. Following this screening, both films plan to hit the International film festival circuit.
“Meeting MacGuffin: An Animated Ecological Thriller” is the sequel to the multi-award-winning animated stop-motion film “Hanging By A Thread” (2013), the second in a trilogy of short films written, animated and directed by Catya Plate.

“Meeting MacGuffin” continues the tale which began in a post-apocalyptic future where a new breed, a group of scientists called the Clothespin Freaks, are reassembling the fragmented remnants of humanity in order to give humanity a second chance to restore balance to the world.

The script for “Meeting MacGuffin” made it into the Quarter Finals (Top 40 Shorts) at the renowned Cinequest Screenwriting Competition in 2015.

Born in Barcelona, Spain, and raised in Germany, Catya attended the Werkkunstschule, Köln, before coming to New York on a Fulbright Scholarship for postgraduate studies at School of Visual Arts.

In 2003, Plate invented the Clothespin Freak characters, two-headed characters made of clear clothespins, sewn pieces and doll’s body parts, in a series of drawings as “a serio-comic response to our angst-ridden times.” In Plate’s paintings, sculptures, artist’s book and installations, the Clothespin Freaks continue to evolve. In 2009, inspired by filmmakers like Jan Svankmajer and the Bolex Brothers, Catya created Clothespin Freak Productions to bring her “Clothespin Freaks” characters to life through stop-motion animation short films.

Based on Plate’s “Clothespin Tarot” artist book from 2007, “The Reading” was born. In 2012 “The Reading”, was awarded Best Animated Film at the Seattle True Independent Film Festival and received an Outstanding Achievement Award for Experimental Film at the Williamsburg International Film Festival. In 2013, Plate produced “Hanging By A Thread”, the first short in an upcoming trilogy. As of 2016, “Hanging By A Thread” has won 9 awards including a Female Filmmaker Award for Outstanding Achievement at FrackFest, a Platinum Remi Award at the 48th Annual WorldFest Houston and two Awards of Excellence at the prestigious IndieFEST Film and Best Shorts Competition. It has screened in over 22 film festivals in the US and abroad, like the Academy Award-qualifying St. Louis International Film Festival. Catya has recently been added to the prestigious GREAT WOMEN ANIMATORS list and was a juror for animation and expea juror for animation and experimental film at the celebrated Brooklyn Film Festival.

Catya heads to Spain at the end of February to conduct a workshop with students from the Fine Arts School. The resulting animation will be screened at ANIMAC in Lleida, Spain, as part of the upcoming ANIMAC International Film Festival. The title of the workshop is– WATER IS LIFE: IMAGINING A WORLD WHERE WATER IS THE RAREST AND MOST VALUABLE RESOURCE. Following this “Meeting MacGuffin” hits the International film festival circuit. Several film festivals have already asked about hosting the world premiere of “Meeting MacGuffin.”

Plate’s mentor, Heather Dell, Art Historian and Director at Magnan Metz Gallery in New York says, “Catya Plate conveys her delicious and devilish vision with humor, wisdom, and a big helping of incredible technical and creative execution. Her work is incredibly successful, proving that Third Generation Feminist artists have as much to contribute to Contemporary Art as their predecessors. Plate’s unapologetic reclamation of once feminized materials in conjunction with state of the art technology secures her place in this new art historical and film making genre”.

More information on Catya Plate and Meeting MacGuffin at www.catyaplate.com