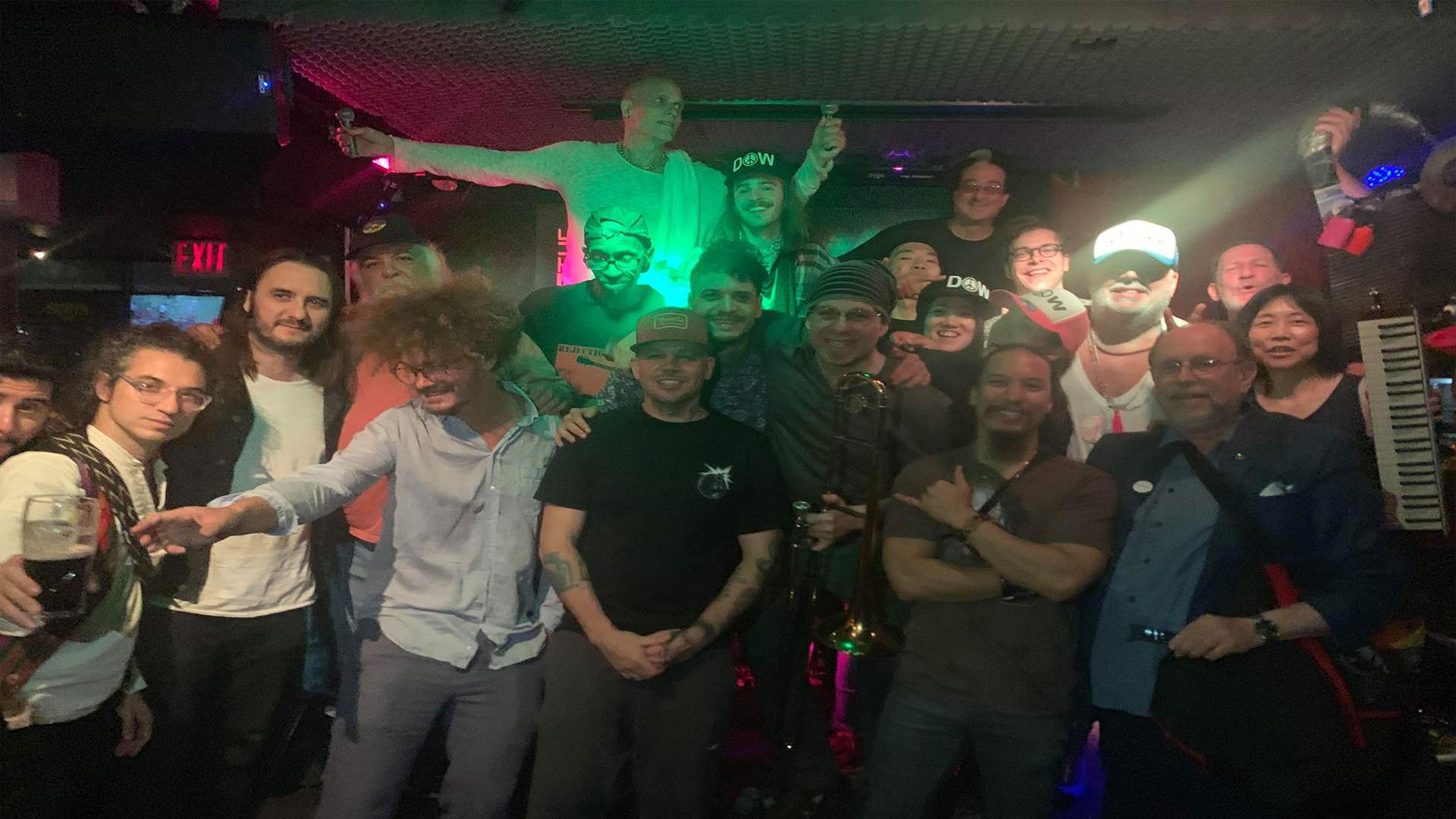 daysOFwild waz born on xmass eve 1994 when we played our very first show at the old rock and roll cafe down on bleecker streeet nyc with the one and only lenny kravitz in the house than we were every monday friday and saturday late-show style at the bitter-end next-door and every thursday late-nite at the red lion also next door…. in 2000 we went to italy 2 play the treviso blues and funk festival and in 2001 we played 4pRiNcE at paisley park in MPLS for hiz birthday in front of 500 friendz and pRiNcE himself did sound hehehe as we played a two hour pluz set of alll hiz music with jerry martini rose stone cynthia robinson & larry graham all in the house from sLy and the family stone….. in 2009 and 2017 we played 4sLy stone’z b/day at bb-kingz in nyc with original drummer & hallOFfamer from sLy & the family stone greg errico and sax player jerry martini and juzt recently we played at WE2019 woodstock eXperience in north carolina also with greg-errico !!!! WE R STILLL THE DAYS OF WILD hehehe LIVE every thurs. late-nite at 1am at the red-lion nyc woowoo alll peace luv and reespect thru music worldwide !!!!

All the 193 countries of the UN unanimously agreed to a Day of Peace and McKinsey Co. states that there are over 1.6 BILLION people aware of the day. At noon the UN Resolution asks the whole world to create a moment of silence, we also create the largest Human Peace Sign at Noon, will a Major Billboard as well.

Can join us performing the music of Sly and the Family Stone?

We will also do a story for our www.peacedayparty.org and www.goodnewsplanet.TV and social sites. This year we feature our Woodstock Forever: Peace, Love & HOPE movie theme, www.woodstockforever.org as this exact location is where Richie Havens, Juma Sultan and a group from Woodstock came to celebrate the 1989 20th Anniversary!

Some of the events we have planned:

2 Vigil For Peace & Ecology.9/15 – Celebrating their 20th Anniversary, our Peace Day Party will join in for the opening of the Central Park Band Shell/NYC event. A Gala Performance with entertainment in costume from around the world will create our Human Peace Sign.

3. Video Feeds from newly created Peace stories, including Major Donors. Major Broadcast to the world on September 21, 12 noon, the declared International Day of Peace. The broadcast will incorporate all these pre-recorded feeds. Our main broadcast partner is www.peacechannel.TV and we are in negotiation with some of the largest worldwide Traditional & WEB broadcasters. There will be 100’s of segments that will be appearing, with Peace Messengers, Dignitaries from all fields, Celebrities and a roster of broadcasters sharing Peace Video’s on www.peacechannel.TV .

WHAT WILL WE DO?

2. Have SING ALONG with Peace and Love Songs and our focus is CHILDREN, Woodstock Forever outreach. We will dance and share peaceful thoughts.

3. Hold the Peace Prayer Society FLAGS OF ALL OF THE COUNTRIES IN THE UN to represent to world.

4. Hold HUGG-A-PLANETS representing all the people of the world and our ANIMAL AND PLANT KINGDOMS. BRING YOUR PETS!

5. Video tape the event and distribute it to the WORLD. We will roll into the program organizations, celebrities and believers that we can have WORLD PEACE totally. NO MORE WAR. THEN PARTY FOR PEACE.

1. International Peace Day and Peace Day Party stand for the “Rights for People to Live in Peace, Respect for All, Building Block for Peace, 2030 17 Sustainable Goals ” We support the UN initiative and work to broadcast it happening, as well as everyone being peaceful.

HOW CAN YOU HELP? Join us at our events and help to get the word out. Go to www.peacedayparty.org and watch our sizzle reel below. In Peace and Love for Our ONE World Family.

Incorporated and integral to the Special Peace Show
are educational Peace Video pieces from founders:

“All we are is what we are with each other.” Zeal

Previous Post: « What is Love and Peace for Nancy?
Next Post: Two Gentlemen I met on the bus on the way to Woodstock 50 in Bethel from Port Authority »