Giorgia Fumanti was born in the medieval village of Fivizzano in Tuscany, she shares her thought on the International Day of Conscience and performs

You are here: Home / Public Service / Events / Giorgia Fumanti was born in the medieval village of Fivizzano in Tuscany, she shares her thought on the International Day of Conscience and performs 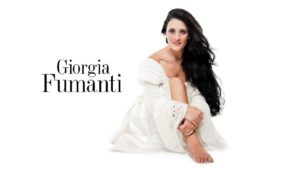 https://www.giorgiafumanti.com/en/
raised in the nearby small city of Aulla at the foot of the 13th century castle (Fortezza della Brunella) and in Monterosso al Mare, a small town in one of Italy’s most beautiful regions, the famed Cinque Terre. Giorgia studied voice at the highly esteemed Music Conservatory of Parma, Italy, (Conservatorio di Musica Arrigo Boito) where her unique soprano voice and talent quickly came to the attention of the heads of Decca Music in the UK, Sony Music, Warner Music and EMI Music in New York with whom she signed her first international recording contract. Her first international release, “From My Heart”, with EMI reached the Billboard’s Top 20 Crossover Chart and peaked to No. 1 in Japan and South Africa. With successive albums that all achieved varied success in various parts of the world, including “Elysium” that also charted in the Top 5 on Billboard’s Classical Crossover Chart and her most recent album “Amour” which peaked to No. 1 in the sales charts in Canada, Giorgia has established herself as one of the top female Classical Crossover singers in the world.
The Universal Peace Foundation (www.upf.org) named Giorgia Fumanti, this past year, Ambassador for Peace. Giorgia received this lifetime distinction following her performance in Central Park, in New York City, for the International Day of Peace celebrations. Other achievements include being awarded the Public’s Choice Award at the Kremlin in Moscow at the AMA Music Awards, the prestigious Premio Lunezia Nel Mondo Award in Carrara, Italy and the Personality of the Year by the CIBPA Association in Montreal, Canada.
Very important invitations
Giorgia Fumanti has had the honor of being selected to sing the theme song “Better City, Better Life” for the Shanghai World International Expo. She was the special guest at the Beijing Olympics for CCTV, at the Closing Ceremony of the Shanghai Special Olympics and other important celebrations and sporting events such as singing the National Anthem at the NHL All Star Game in Dallas, Texas and at the Opening Ceremony of the International SportAccord Combat Games in Beijing alongside Jackie Chan. Giorgia also had the honor to perform for Vice President and Noble Peace Prize winner, Al Gore, for various US Governors, as well as for New York Mayor Michael Bloomberg at Gracie Mansion and many other personalities all over the world. She recently was asked to perform as special guest in New York City at both Central Park and the world-famous Times Square as part of the International Day of Peace celebrations decreed by the United Nations.
She participated in 3 PBS TV Specials in the USA, “Heavenly Voices”, “Sharing Christmas with John McDermott” and “Benise’s Spanish Guitars”. Yukari Nakano, the famous Japanese figure skating champion used Giorgia Fumanti’s song “Aria” in her Grand Prix Exhibition Programs.
She has performed all over the world with some of the most prestigious symphony orchestras such as the Royal Philharmonic Orchestra (London), the Beijing Symphony Orchestra, the Hong Kong Philharmonic Orchestra, the Seoul Philharmonic Orchestra, the MBC Pops Orchestra and the Iksam Philharmonic Orchestra in South Korea, the Shanghai Philharmonic Orchestra, the Evergreen Symphony Orchestra (Taiwan), the Taipei Philharmonic Orchestra (Taiwan), the Guangzhou Philharmonic Orchestra (China), the Montreal Symphony Orchestra, the RAI Symphony Orchestra (Rome) and many others.