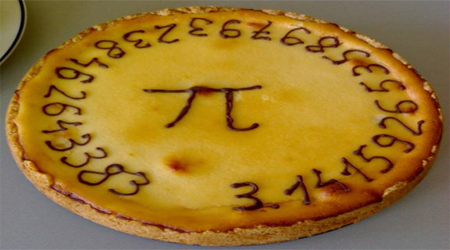 Today is March 14. Translated into the month/day annotation, it is 3/14. These three digits create the commonly used approximation for the number π. For those who don’t remember this grade-school algorithm, π represents the ratio between a Euclidean circle and it’s diameter. Since the circle is one of the most common shapes in mathematics, science and engineering, the importance of this little letter cannot be underrepresented.

Larry Shaw, a San Francisco physicist, was the first to create the holiday back in 1988. Along with coworkers and friends, he would lead the annual march around the San Francisco Exploratorium, and follow it by consuming fruit pies. This celebration became a tradition that the Exploratorium continues to this day. On March 12, 2009, the U.S. House of Representatives passed a non-binding resolution recognizing March 14 as Pi Day. Of course, nothing is official until Google says so, and in 2010, the famed website changed its logo to reflect the holiday (they didn’t do it this year unfortunately).

Any mathematician can tell you that π is not contained to just these 3 digits. (In fact, to document the entire number would take up much more space than this article has room for.) In the same way, π is not limited to this one holiday. June 28 is 2π day; 2π is approximately equal to 6.28. July 22 is also Pi Approximation Day, named because of the common approximation of π, 22/7.

So take a taste of apple pie, or whatever flavor you like, and have a healthy discussion on what the number means to you. Perhaps you can talk about the theory of relativity while you’re at it. March 14 is also Albert Einstein’s birthday–his 132nd to be approximate.