Headed North, Sandhill Cranes Squeeze In Where They Can

You are here: Home / All We Need Is Love / Pets and Animals / Headed North, Sandhill Cranes Squeeze In Where They Can 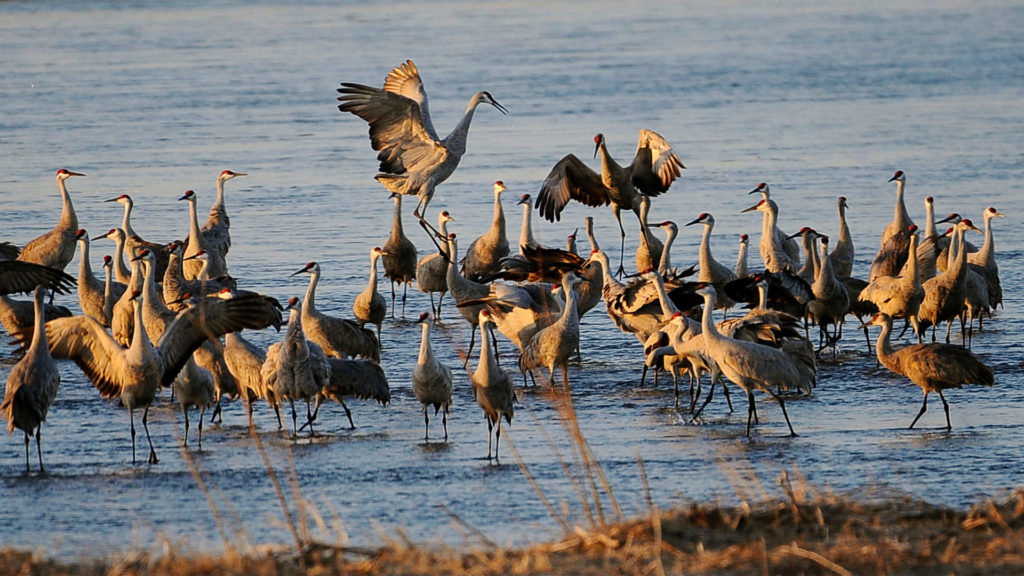 Sandhill cranes on March 20 in the Platte River in Grand Island, Neb. The peak roosting period this year was March 8 through March 16.
You’ll hear it before you see it.

The ancient call of a single crane can trumpet out for miles. And when they all cry out at once the sound multiplies by the tens or hundreds of thousands.

Each spring, around half a million sandhill cranes descend upon a small stretch of the Platte River in Nebraska on their way north to Canada, Alaska and Siberia, from their winter homes in Mexico and the Southwest. Starting around Valentine’s Day through the first half of April, they rest there to prepare for nesting up north.

Thousands of visitors come from all over the world to greet them. This year, biologists at the Crane Trust estimated around 400,000 cranes roosted at the migration’s peak between March 8 and 16. But a quarter-million or so cranes are still gracing the valley with their majesty. As tours become less packed, now is a good time to see them — and hear them.

“The experience — maybe even 60 to 70 percent of it is the sounds,” said Bill Taddicken, director of the Iain Nicolson Audubon Center at Rowe Sanctuary in Nebraska. “It sounds a lot like a football stadium when your favorite team scores a touchdown.”

Mr. Taddicken says you cannot see the birds, which migrate thousands of feet above the earth, until they descend.

“These tiny little specks of pepper in the sky will emerge, and then they’ll drop down, become cranes, and they’re here,” he said.

But this Oz is real — and critical — for the nearly 80 percent of the world’s sandhill crane population that arrives here.

The river, agricultural fields and wet meadows provide all the protection and nutrients they need to become fit and stock up on energy for nesting. During their brief stay, they can pack on around 20 percent of their body weight. Some also perform elaborate courtship dances, forming pair bonds that may last for life.

About a fifth of the last wild migratory flock of 300-some whooping cranes also stop here along their spring and fall migrations.

But over the years, dams have transformed the habitat the cranes once occupied. A majority of the birds now squeeze into just 20 or so miles of prime habitat along the river between Kearney and Grand Island, Neb., but around four times that much was all prime years ago.

“The spectacle we see of all of these birds packed into one area is really an indication of a river in peril,” Mr. Taddicken said.

If you want to see the cranes in great numbers, the best time to go is in the morning when they fly out from the river to eat, or the evening, when they fly back to roost on sandbars. The land that offers the best views is mostly private, so you will have to book a tour: Rowe Sanctuary and Crane Trust have some.

Esther was born and raised in Madrid, Spain. Her first contact with dancing was at the age of 8 when she joined a competition figure skating team.
Next Post: A Positive Outlook May Be Good for Your Health