You are here: Home / Good News To Go / Mark Shriver 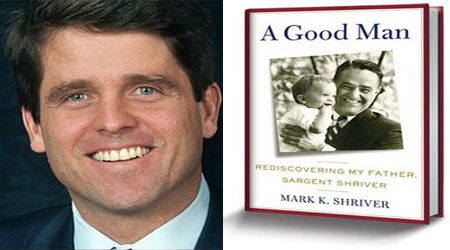 Mark Kennedy Shriver (born February 17, 1964) is a United States Democratic Party politician who served as a member of the Maryland House of Delegates for two consecutive terms, from 1995 to 2003. He currently serves as Senior Vice President of US Programs for the charity Save the Children.[1] Shriver married Jeanne Eileen Ripp (born November 30, 1965)[2] on June 26, 1992[3] and they have three children: Mary Elizabeth “Molly” Shriver (born on 1998), Thomas Kennedy “Tommy” Shriver (born 1999), and Emma Rose Shriver (b. 2005).


Shriver was born in Washington, D.C. He is part of the Kennedy political family, since his mother was Eunice Mary Kennedy. He may also be considered to be a part of the “Shriver political family”, since his ancestor David Shriver was a delegate of Frederick County, Maryland who signed the Maryland Constitution and Bill of Rights at Maryland’s Constitutional Convention of 1776, and his father is Sargent Shriver, the first director of the Peace Corps upon its establishment by President John F. Kennedy on September 22, 1961, a former ambassador to France and the 1972 Democratic Vice Presidential candidate. Mark Shriver has written a memoir about his father, A Good Man: Rediscovering My Father, Sargent Shriver.[4] His sister, Maria Shriver, is a former journalist and the former First Lady of California (she was married to former Governor of California Arnold Schwarzenegger until mid-year 2011).

Shriver attended high school at the Georgetown Preparatory School, North Bethesda, Maryland. Afterward, he earned a bachelor’s degree from the College of the Holy Cross in 1986, and a master’s degree in public administration from Harvard University in 1993.

In 1994, he was elected to the Maryland House of Delegates, the lower house of the Maryland state legislature, representing Montgomery County, Maryland, District 15, and was reelected in 1998. He did not seek reelection in 2002 and was succeeded in that post by Brian Feldman.

In addition to serving as a delegate, he worked on the Task Force on the Maryland Prepaid-Tuition Savings Program in 1996, and on the Task Force to Study the Governance, Coordination, and Funding of the University System of Maryland from 1998 to 1999. He was a Founder and Executive Director of The Choice Program, an at-risk youth intervention project of the Shriver Center at University of Maryland, Baltimore County established in 1998. He then served on the Advisory Board on After-School Opportunity Programs from 1999 to 2003. From 2000 to 2001, he served on the Judith P. Hoyer Blue Ribbon Commission on Early Child Care and Education.

In 2002, he ran for U.S. Representative from the 8th Congressional District of Maryland. Despite innovative technology measures, Shriver was defeated in the Democratic primary by Chris Van Hollen, the eventual winner. Shriver lost 43% to 41%.[6]