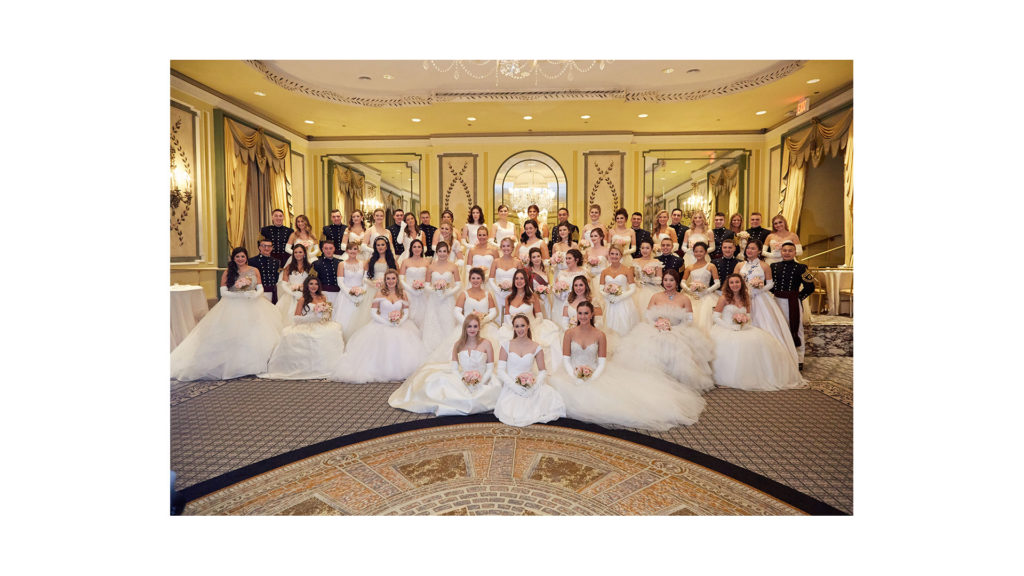 Miss Helen-Anne Stearns Gable, the daughter of Mr. James Stearns and the Hon. Lisa Guillermin Gable of Upperville, Virginia, will make her debut at the 62nd anniversary of the International Debutante Ball on Thursday, December 29th, 2016 in the Grand Ballroom of The Pierre in New York City.

Helen-Anne attends Southern Methodist University. She was a Senate Page for the former Lt. Governor of Virginia, Bill Bolling, and has had internships at U.S. Senator Lamar Alexander’s office and Virginia State Senator Jill Vogel’s Vogel for Lt. Governor Campaign. While at Episcopal High School she was Photo Editor of the EHS yearbook and was on the varsity track, cross country and crew teams. Helen-Anne participated in a summer exchange program with Lycee Stanislas in Paris and attended the Concordia Language Camp, Mori no Ike, to study Japanese.

Miss Gable’s father, Jim Gable, holds an MBA from Harvard Business School, a BS/MS from Stanford University and graduated from Deerfield Academy. His work includes executive positions at Comcast, Apple and he was the president of a start-up, which he sold to 3Com Corporation. Mr. Gable is also on the Board of Belle Grove Plantation. Ms. Gable holds an MA from Georgetown University and a BA from the University of Virginia. She has served at senior levels under four Presidents and two Governors, both Democrats and Republicans, including positions at the White House and the UN. She was appointed the first female U.S. Commissioner General to the 2005 Aichi World EXPO and held the rank of ambassador. A recently retired food and beverage company executive, Gable is President Emeritus of Healthy Weight Commitment Foundation and a National Trustee of Boys and Girls Clubs of America.

For her debut, Miss Gable has chosen to wear a couture gown “Amanda” by Pronovias. This beautiful ball gown of silk mikado is off-white and strapless with a sweetheart neckline.

The International Debutante Ball, founded in 1954, is considered one of the most prestigious debutante presentations. Young women of distinction from all over the country and around the world are brought together at the ball and the surrounding parties with daughters of diplomats, titled Europeans, ambassadors, governors and presidents of the United States. Over the years, the ball has benefited numerous charities through the International Debutante Ball Foundation, including one of its major beneficiaries, the Soldiers’, Sailors’, Marines’, Coast Guard and Airmen’s Club of New York, which provides a home away from home for the men and women of our armed services.

Elegant, young and full of promise, forty-six accomplished young women of distinction made their debuts at the 62nd International Debutante Ball and dinner dance at the Pierre Hotel in New York City on December 29th. Each debutante made her entrance exquisitely poised in a designer dress, carrying a bouquet of pink roses and was accompanied by her own escort in white tie and tails.  As she walked into the spotlight to be formally presented, the Lester Lanin Orchestra played her country or state song. This year’s debutantes represented the United States, England, France, Scotland, China, Canada and 12 American states.

A colorful and patriotic event, the International Debutante Ball is the loveliest and most enjoyable family occasion of the New York social season. The ball provides a social setting where young women and men from all over the world meet one another, have a wonderful time and form lasting friendships. The ball benefits The International Debutante Ball Foundation Charities, including the Soldiers’, Sailors’, Marines’, Coast Guard and Airmen’s Club of New York City.  www.internationaldebutanteball.com

The International Debutante Ball History
A colorful and patriotic event, the International Debutante Ball is the loveliest and most enjoyable family occasion of the New York social season. The Ball provides a friendly social context where young men and women from all over the world meet one another, have a wonderful time and form lasting friendships. The Ball was founded in 1954 by Beatrice Dinsmore Joyce and since 1983, her niece Margaret Hedberg has continued as General Chairman. For six decades, the International Debutante Ball Foundation (a 501 (c)(3) nonprofit) has benefitted numerous charities, primarily the Soldiers’, Sailors’, Marines’, Coast Guard and Airmen’s Club of New York City, which for over ninety-five years has provided a home away from home for young men and women of our Armed Forces and those of our Allies.
Daughters and granddaughters of United States Presidents and United States representatives have included the three granddaughters and four great-granddaughters of President Eisenhower, both daughters and one granddaughter of President Nixon, two granddaughters of President Johnson and one granddaughter of President Bush, as well as daughters of Mr. and Mrs. Malcolm Steve Forbes, Jr. and Mr. and Mrs. Christopher C. Forbes. Families of ambassadors, nobility, as well as businessmen and women have all attended the Ball.
While the majority of the debutantes come from the United States, each year about one fourth of the young women come from abroad and form lasting friendships with their American counterparts. In total, seventy-five countries have been represented at the Ball, with France, England, Italy and Germany being represented most frequently.
This year the Ball is held in the beautiful Grand Ballroom of the Pierre Hotel in New York City. The evening begins with the receiving line, where guests meet the debutantes and press and candid photos are taken. Cocktails are then served. After dinner and dancing in the Ballroom, each debutante is presented, one at a time, accompanied by a young man in white tie and tails. As the debutante walks down the center of the Ballroom to make her bow, the orchestra plays a song appropriate to the country or state represented.

The wonderful birthday party——Adrienne Ng and Ramadan Ameen share their thoughts on living life with these statements.
Next Post: Get Ready for the Biggest High School Football Game of the Year U.S. Army Soldiers