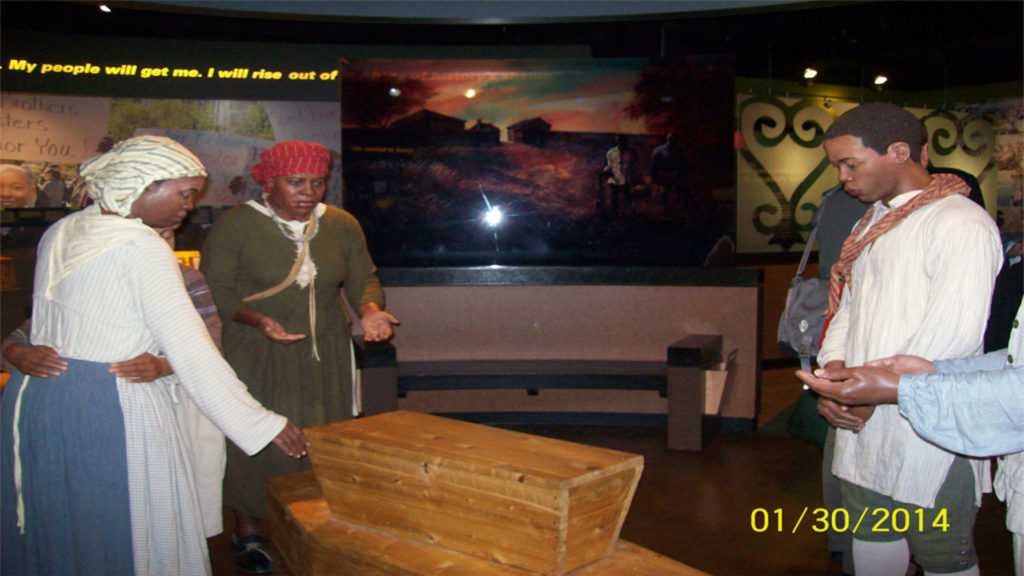 Rediscovery of the African Burial Ground alerted the City and the world to New York’s early history and the African people who worked and lived here. This burial ground is the final resting ground for ancestors from many African descended cultures. Their living legacy makes an important reminder of a dark and often forgotten period in New York City history.

The African Burial Ground National Monument is located on the first floor of the Ted Weiss Federal Building located at 290 Broadway in Lower Manhattan. A Visitor Center and exhibition space includes exhibits about the history of the cemetery, the African contribution to the building of early New York City as well as the more recent events surrounding the site’s discovery and construction. Approximately 15,000 people are buried in this ground. The remains of 419 men, women and children were uncovered when the site was escalated in 1991 and 1992. All were buried with honor in the Rites of Ancestral Return Ceremony in 2003. If every burial was excavated the wall of photos in the exhibition site would wrap the entire gallery.

Upon entering the building a park ranger invites you to the Visitor Center and exhibition site for an introduction to the African Burial Ground’s final resting place of enslaved and free Africans in New York City from the 1690’s to the 1790’s. A 1697 Dutch law banned African burials in a New York City’s cemetery. Over the next two centuries, the burial ground was covered with layer upon layer of buildings and fill material which protected the human remains until rediscovery in 1991. The African Burial Ground was designated as a national monument in 2006 by President George W. Bush, and remains the only U.S. national monument that memorializes the struggles of Africans and their descendants.

The lobby of the Ted Weiss Federal Building displays commissioned artwork inspired by the burial ground and early African experience in New York. Some of the art includes “Unearthed” by Frank Bender, “Africa Raising” by Barbara Chase-Riboud and American Song” by Clyde Lynds.

Today, an outdoor memorial designed by Rodney Leon is a living tribute to past, present and future generations of Africans and their descendants. It is located behind the Ted Weiss Federal Building at the corner of Duane Street and Elk Street. They are reburied as closely as possible to their original positions. The coffins are placed in seven crypts and seven burial mounds marked the locations. Seven trees serve as guardians for the entrance to the Ancestral Chamber.

The National Park Service Rangers will take you on a 90-minute walking tour of Lower Manhattan. Along the way you’ll hear about the first Africans who built the New Amsterdam colony, the violent revolts against oppressive British-rule and the struggle for freedom during the Revolutionary War and later on the Underground Railroad. This walking tour also features audio clips from noted authors and historians including Mike Wallace, author of Gotham: A History of New York City to 1898 and Christopher Moore, historian, Schomburg Center for Research in Black Culture.

Groups larger than 10 are required to make reservations. Download an Educational Service Request form to begin the reservation process. For additional questions regarding visitation to the African Burial Ground National Monument please call (212) 637-2019

African Burial Ground National Monument is one of over390 areas in the National Park System. For more information visit: www.nps.gov