Ramon Singing in the Subway ~ Christmas in July *Special*

You are here: Home / Living & Learning / Enlightenment / Ramon Singing in the Subway ~ Christmas in July *Special* 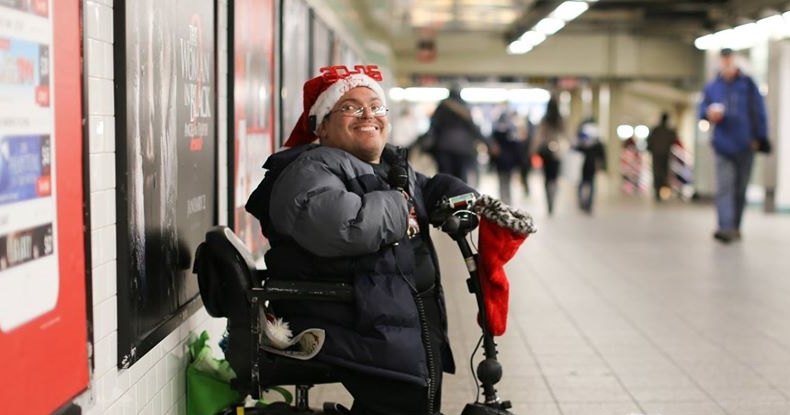 Ramon has warmed people’s hearts singing songs for passersby. As the video starts, someone says, “You lift my spirits!”

In our Good News video, Ramon sings “Have Yourself A Merry Little Christmas” with background music playing from his phone and a microphone. Reverend Paul Sladkus asks what Peace means to him. Ramon tell us what peace means which a chuckle and a huge smile. “That’s Peace!”

“My mother and I lost our apartment when the landlord raised the rent. She went to live in my aunt’s attic in New Jersey, but there were too many stairs there, so I had to go to the homeless shelter. Most of the people at the shelter have addiction problems and mental issues. I’m living with people that I never thought I’d have to live with. The M35 is the only bus that goes to the shelter. Disabled people are supposed to get on first. But as soon as it gets to the stop, everyone rushes in until it’s full, and the bus driver is too intimidated to say anything. A lot of times it leaves without me.”

Update: Ramon said that he did not want donations because his brothers were going to take him in. He insisted that the funds should be used to help others in need.