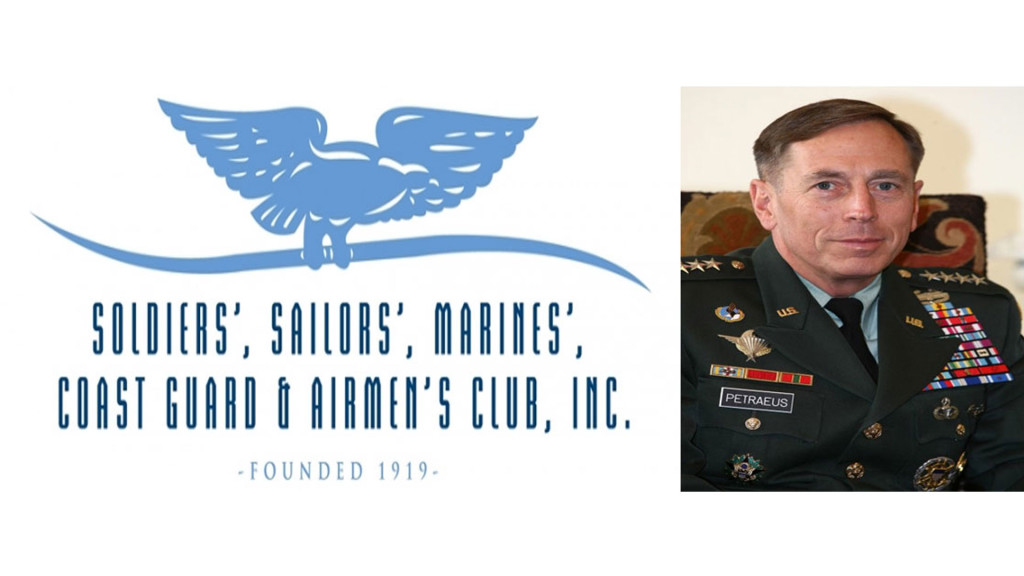 honors General David Howell Petraeus. Part Two. (Note: We ran out of tape, but we have the end of his philosophical comment in text)

‘I’ll keep in mind a Cautionary tale of young schoolboy who gave a report about Julius Caesar: he was a great general, he won some important battles, he made a long speech, they killed him.” – I will try to avoid Caeser’s fate this evening.

“Addressing such eminent company in this great city with this great organization, one can almost begin to feel a little bit important- thankfully I have plenty of experiences from early days in the army to keep that impulse in check…

One episode in particular- I was fresh out of West point, a new second lieutenant, out with my new platoon for the first time, we’d a long day and we didn’t crawl into our sleeping bags until just before midnight. I’d only been asleep for an hour or so, when my platoon sergeant, a Wise old airborne veteran elbowed me and woke me up, “Sir Look up and tell me what you see.” So I looked up at a beautiful night sky and I told him, “I see a million stars, platoon sergeant” — And what does that tell you sir?” he asked.  I wasn’t quite sure what he was getting at, so I thought about it for a moment and then gave an answer I thought was truly indicative of a keen intellect.   “…Well (there’s) millions of galaxies and potentially billions of planets.  Theologically it tells me that God Is great and we are but small and insignificant. Meteorologically, it tells me that we’re going to enjoy a beautiful day for training tomorrow.

There was a long pause as my platoon sergeant considered this obviously weighty answer. He seemed to be speechless in fact after that impressive response.

So I finally asked him, “What does it tell you, platoon sergeant?”

“Well sir, it tells me, that’s somebody stole our tent.”

“While Americans may debate being for or against various endeavors undertaken by our government,  it is heartening that virtually all our citizens agree on one political point, that we should all support those who put themselves in harms way to serve our country.”

I was privileged to serve in some tough places during my final decade in particular. —

Indeed  the marines and all in military service Share the same virtues Under the most demanding of conditions, the men and women who wear our nation’s uniform, consistently display valor, creativity, initiative and resolve – and I was privileged to see those qualities up close during most of the last decade on places like Iraq and Afghanistan.

Thanks as I now lead another group of patriots – our country’s silent warriors, the talented and courageous officers of the CIA—

Since 1919 continues to fulfill its mission, as the only private organization in the New York area to provide accommodations at subsidized rates and club-type facilities for servicemen and servicewomen, military retirees and veterans and their families visiting New York City. General James F. Amos, Mitzi Perdue, Robert McManus and special guest General David Howell Petraeus. PHOTO of USO girls, please credit herbertcollection.com.
Founded in 1919
“Serving Those Who Have Served Their Country”
Mission
“To promote the general welfare of men and women of the Armed Forces of the United States and its Allies, and their families, by maintaining and offering club and lodging rooms”
In 1919, Mrs. Cornelia Barnes Rogers and Mrs. Theodore Roosevelt, Jr. with General John J. Pershing founded The Soldiers’ and Sailors’ Club. In war and peace, without any U.S. Government funding and supported solely by donations of patriotic Citizens, it has ever since been a “Home Away From Home” for over 2,500,00 men and women of the Armed Forces and their families. We have exisited now for over ninety years with our warm, friendly, and safe enviroment providing hospitality and accommodations for 15,000 Armed Forces personnel annually.
With the continued help of our patriotic friends, it always will be.
Founders
General John J. Pershing Mrs. Cornelia Barnes Rogers
Mrs. Theodore Roosevelt, Jr.
http://ssmaclub.org/

For Part One go to: http://goodnewsplanet.com/the-soldiers-sailors-marines-coast-guard-and-airmens-club-part-1/