Truth to Triumph: A Spiritual Guide to Finding Your Truth, Click for Video & Podcast…

You are here: Home / Good News To Go / Truth to Triumph: A Spiritual Guide to Finding Your Truth, Click for Video & Podcast… 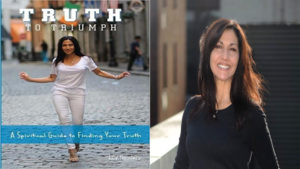 When Life’s Hard Knocks Make You Feel Beaten,Take Heart From Lily Sanders, Whose Conquest Over Abuse and Hardship Led to

Today,Lily Sanders can point to extraordinary the successes of being named one of the top 15 coaching experts in New York City, years as a soap opera regular and TV/movie dancer and actress, multiple-franchise owner, devoted mother and even a year as a featured Barnum & Bailey Circus show dancer!

But it was her privatelife that proved to be her real crucible. Repeatedly aligning herself withdamaged men, she found herself once again emotionally and physically abused.And then in a life-long custody wrangle with her ex-husband over her belovedson. But she knew she had to break the pattern. So she started with herself.

Truth to Triumph: ASpiritual Guide to Finding Your Truth is the story of how she found her truth, how she forged anew relationship with her higher self and the Divine to be a beacon of love forthose to follow.

Lily Sanders’ lifeexperiences, adversity, talent, sense of humor, and intense compassion hasgifted her a purpose to write, influence, and coach others. As a magazinecolumnist, Lily inspired thousands, while writing her own powerful book. Hernewly international released book, Truth to Triumph: A Spiritual Guide toFinding Your Truth hasalready begun transforming lives.

Lily grew up in adomestically violent home, and used ballet class as her sanctuary. That becamea springboard to a successful career as a dancer, TV and film actress, Broadwayperformer and later successful multiple franchise owner. But domestic abusefollowed her long into adulthood, risking her life and that of her son…untilshe took the steps to learn to love herself unconditionally and connect withthe Source power of love. Today, she is a highly successful coach in New York helpingwoman live fully empowered, happy lives.