in Honor of Veterans Day at USCIS New York Office 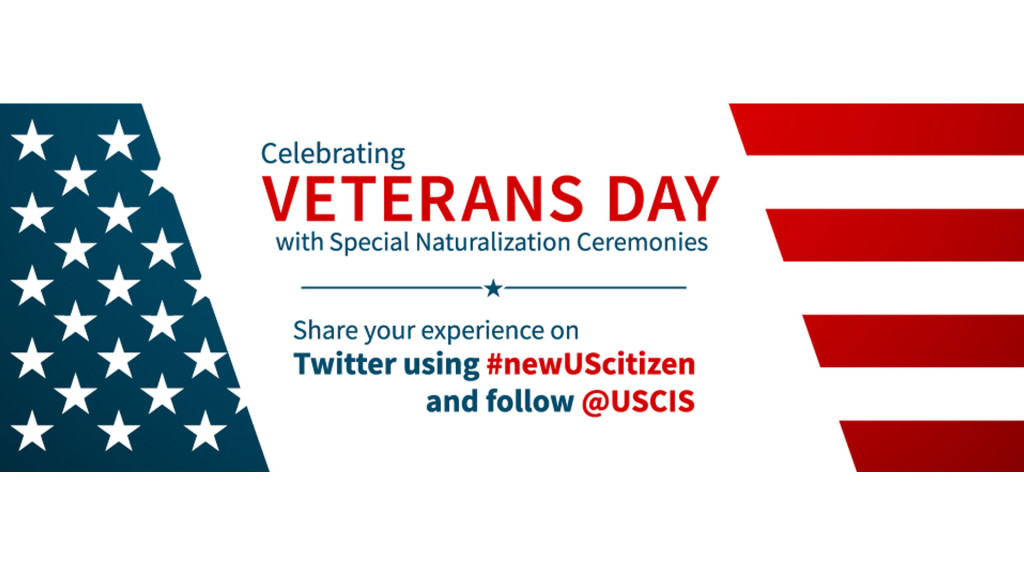 This year, USCIS will welcome more than 10,000 new citizens in nearly 130 naturalization ceremonies between Nov. 7 and 13. Of those being naturalized, more than 250 are veterans, service members and military spouses. USCIS is asking new citizens and their families and friends to share the experience and photos at their ceremonies via Twitter using the hashtag #newUScitizen.

Friday, November 13, 9 a.m. (media will be escorted in starting at 8:30 a.m.)
WHERE:
USCIS NY District Office
26 Federal Plaza (please use the entrance on Duane Street between Broadway and Lafayette)

NOTE:
Media interested in participating, please RSVP to Katie Tichacek (contact info above) no later than 9:00 am EST on November 13.

USCIS Will Host Naturalization Ceremonies to Honor Veterans and their Families

WASHINGTON—Veterans, service members and military spouses across the country will become U.S. citizens this week as they take the Oath of Allegiance at special Veterans Day naturalization ceremonies. U.S. Citizenship and Immigration Services will highlight the sacrifices that military members and their families have made while serving our country. From Nov. 7-13, USCIS will welcome more than 10,000 new citizens in nearly 130 naturalization ceremonies across the country and around the world. Of those being naturalized, more than 255 are veterans, service members and military spouses.

Many current and former military members and their families are eligible for citizenship, including expedited screening and overseas processing, under special provisions of the Immigration and Nationality Act. Since Oct. 1, 2001, when data collection on military naturalizations began, more than 109,000 service members have become U.S. citizens, including individuals serving in Iraq, Afghanistan, South Korea, Germany, Japan and elsewhere. In 2015 alone, USCIS hosted nearly 175 naturalization ceremonies at military installations in the U.S. and abroad.

“On Veterans Day, we salute the men and women who have so courageously served our country and defended the freedoms that it was built upon. Among our brave veterans are thousands of immigrants, many of whom vowed to defend their new home even before they were citizens,” USCIS Director León Rodríguez said. “It is because of their extraordinary sacrifices, and those of their families, that we can enjoy the rights and liberties of living in this great country.”

USCIS has a robust military outreach program that provides information about immigration and naturalization to service members and veterans at military installations, Department of Veterans Affairs hospitals, universities and various military organizations. USCIS also has offices on multiple military installations, including Fort Benning, Georgia; Camp Lejeune, North Carolina; and Joint Base San Antonio-Lackland, Texas. These offices identify recruits who may be eligible for naturalization.

USCIS’ Veterans Day activities this year will feature a naturalization ceremony at the USS Torsk and USS Constellation, located at the Inner Harbor in Baltimore, Maryland, on Nov. 11. During this event, Dan Renaud, USCIS associate director for the Field Operations Directorate, will administer the Oath of Allegiance, and Sgt. Maj. Mercy A. Diez of the U.S. Army Band will be recognized as an Outstanding American by Choice.

Other ceremonies include events at:
· American Heroes Air Show in Orlando, Florida, on Nov. 7.
· Cullman Performance Hall of Tryon Palace in New Bern, North Carolina, on Nov. 11.
· Joint Base Lewis McChord in Seattle, Washington, on Nov. 13.

In addition, 12 recruits will become new citizens at the Marine Corps Recruit Depot in San Diego, California, through the Naturalization at Basic Training Initiative. Developed with the Department of Defense, this program allows enlisted service members to complete the naturalization process during basic training.

USCIS invites new citizens, and their families and friends, to share their experiences from the ceremonies through Twitter and other social media using the hashtag #newUScitizen.

For more information on USCIS and its programs, please visit uscis.gov or follow us on Twitter (@uscis), YouTube (/uscis), Facebook(/uscis), and the USCIS blog The Beacon.

The James Jay Dudley Luce Foundation, Inc.
Next Post: Honoring the Most Inspiring in Philanthropy on Nov. 12 in New York City