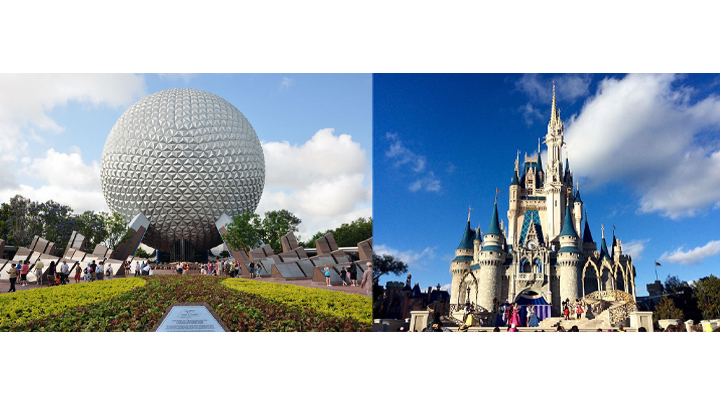 The Walt Disney World Resort, also called Walt Disney World and Disney World, is an entertainment complex in Bay Lake and Lake Buena Vista, Florida, in the United States, near the cities of Orlando and Kissimmee. Opened on October 1, 1971, the resort is owned and operated by Disney Parks, Experiences and Products, a division of The Walt Disney Company. It was first operated by Walt Disney World Company. The property covers nearly 25,000 acres (39 sq mi; 101 km2), of which only half has been used.[3] The resort comprises four theme parks (consisting of Magic Kingdom, Epcot, Disney’s Hollywood Studios, and Disney’s Animal Kingdom), two water parks, 27 themed resort hotels, nine non-Disney hotels, several golf courses, a camping resort, and other entertainment venues, including the outdoor shopping center Disney Springs.

Designed to supplement Disneyland in Anaheim, California, which had opened in 1955, the complex was developed by Walt Disney in the 1960s. “The Florida Project”, as it was known, was intended to present a distinct vision with its own diverse set of attractions. Walt Disney’s original plans also called for the inclusion of an “Experimental Prototype Community of Tomorrow” (EPCOT), a planned community intended to serve as a test bed for new city-living innovations. Walt Disney died on December 15, 1966, during the initial planning of the complex. After his death, the company wrestled with the idea of whether to bring the Disneyworld project to fruition. However, Walt’s older brother, Roy, came out of retirement to make sure Walt’s biggest dream was realized. Construction started in 1967, with the company instead building a resort similar to Disneyland, abandoning the experimental concepts for a planned community. Magic Kingdom was the first theme park to open in the complex, in 1971, followed by Epcot (1982), Disney’s Hollywood Studios (1989), and Disney’s Animal Kingdom (1998). It was Roy who insisted the name of the entire complex be changed from Disneyworld to Walt Disney World, ensuring that people would remember that the project was Walt’s dream.

In 2018, Walt Disney World was the most visited vacation resort in the world, with an average annual attendance of more than 58 million.[4] The resort is the flagship destination of Disney’s worldwide corporate enterprise and has become a popular staple in American culture. In 2020, Walt Disney World was chosen to host the NBA Bubble for play of the 2019–20 season of the NBA to resume at the ESPN Wide World of Sports Complex.